Summertime in New England has always meant Lobster Rolls. Now, Lobster Rolls are a popular summer meal all over the country thanks to people sharing food pictures on Social Media and watching shows and videos devoted to food. I’ve tried dozens of Lobster Rolls all over New England and this is the best Lobster Roll ever. And, if you can get Lobster or Lobster Meat, then you can make it in your own kitchen today!

LOBSTER ROLLS AND ME…

My love for Lobster Rolls began in the late 90’s while visiting my dad in Massachusetts. It continued during college when my brother and I had a standard Summer Order at Papa Gino’s – Two Lobster Rolls and a Large Cheese Pizza. Yes, we ate it all at once, we were young.

Back then, there were a few times I was so desperate that I even ate Lobster Rolls at McDonald’s. Finally my taste buds matured, and by the mid-2000’s I graduated to eating Lobster Rolls from local restaurants around New England. I was on a mission to find the best one.

I planned trips to different Lobster Shacks from Yankee Magazine’s The 12 Best Lobster Shacks in New England and quit half way through because they were all pretty much the same. They were good, but they were not the best. Eventually, I discovered the best Lobster Roll ever after a Saturday Lobster Boil.

Normally, we didn’t have leftovers from a Lobster Boil, but this time we made too much. The next day, I planned to make Lobster Rolls for the first time and spent an hour on Google looking up Lobster Roll Recipes. I was surprised to find so many similar recipes. There were very few recipes with anything more than mayo. I decided to make the sauce like I was making my Spicy Chicken Salad, but with a thinner dressing. The results were a huge hit.

These Lobster Rolls are so good, my family doesn’t even eat the hot, steamed lobster anymore. They all prefer to wait until it cools and have Lobster Rolls instead. I think they just like me cleaning all of the meat for them.

THE BEST LOBSTER ROLLS EVER…

The key to the best Lobster Roll ever is I always start with a great bun. So, please don’t make Lobster Rolls with Wonder Bread. No offense to Wonder Bread, but it is meant for Peanut Butter and Jelly.

Secondly, a great bun for a Lobster Roll must be top sliced. If you are in New England, its easy to find the top sliced bun. In Florida, I buy bakery hot dog buns at the grocery store and slice them myself. After slicing, I slightly toast and lightly butter the buns before loading up with Lobster.

The sauce, or dressing, is where my Lobster Roll takes a pivot from a traditional New England Lobster Roll. I believe a Lobster Roll needs more than a little mayo and a drop of lemon juice. But, I am very careful to never add so many ingredients to cover up the succulent lobster meat. The dressing in this recipe complements the Lobster and adds a unique sweet, spicy, tang that is absent from most Lobster Roll Recipes.

I hope you enjoy these Lobster Rolls as much as I do, and if you decide to make this Lobster Roll Recipe, please comment below. 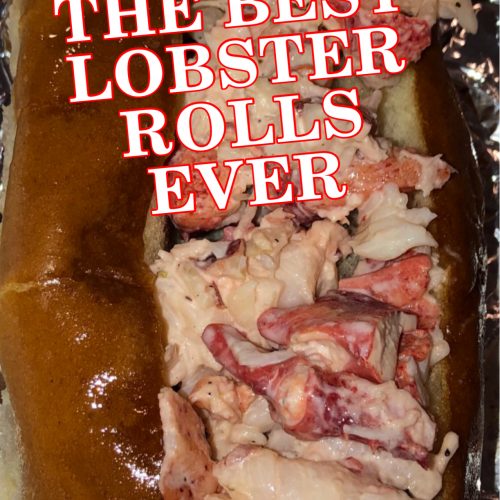 I've tried dozens of Lobster Rolls all over New England and this is the best Lobster Roll ever. And, if you can get Lobster or Lobster Meat, then you can make it in your own kitchen today!
Course Main Course
Cuisine American, seafood
Keyword Lobster, Lobster Roll, Lobster Rolls
Prep Time 1 hour 20 minutes
Cook Time 2 minutes
Total Time 22 minutes
Servings 4 Lobster Rolls
Calories 563kcal
Cost $30

Each Lobster will yield 3oz – 5oz of Lobster Meat between the Claws and Tail.

A Lobster Boil is a great way to feed a crowd on a warm summer afternoon. For many, the best part is cracking open a steaming hot lobster. However, many others, like myself, think the best part is the next day when you get to have a Lobster Roll.

DID YOU MAKE THIS RECIPE?

Please let me know what you think by leaving a Comment in the Section Below.

Similarly, if you really enjoyed it – Please SHARE with your friends using the Buttons below.

Above all, if you decide this Recipe is worthy of a SHARE, you are the best! THANK YOU!!!